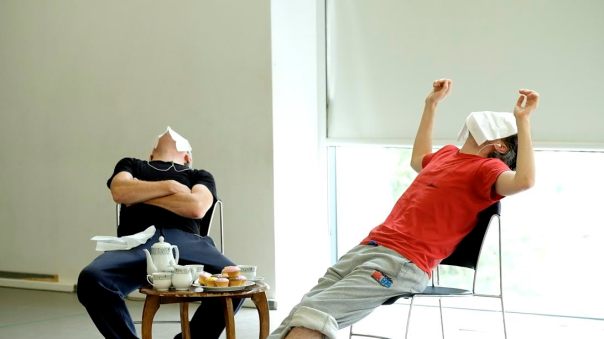 This evening I went to see ‘The importance of nothing’ by the Pan Pan theatre group in the Project Arts Centre in Temple Bar.

I love the theatre – onstage and off. Therefore no arms were twisted to make me attend. My motives were multiple. I wanted to see a show – that’s  a given. But The Project is a space that I had never previously visited. It is an ideal location. An evening of culture, in the stag party quarter of Dublin. This year is the fiftieth anniversary of the Project. It is a venue devoted to staging alternative, modern theatre. Originally it flitted about various northside locations, before finding its permanent home in the big blue building in Temple Bar.

I had no expectations for this evening’s show. I didn’t read any flyers or websites about the play. I went with an empty head. Surprise me. I was hoping for comedy  – and seeing as the title was Oscar Wilde sounding, I thought it probably would be along those lines.

Set in an unnamed prison, Lady Lancing (Una McKevitt) is a drama therapist, who along with her husband Omar – who sits mute at the corner of the stage throughout, fiddling with his technology – run anti-homophobia drama classes for the inmates, using the works of Oscar Wilde. So far, so zany.

Only three prisoners sign up for the course – mainly to avoid the hell of woodwork class.

The play is broken into segments – each one focusing on one of Wilde’s works, and how the prisoners interpret the text and meaning.

It doesn’t have a traditional narrative -there doesn’t seem to be any end point to  the play. No final resolution to the characters’ inner conflicts is obvious.

The prisoners are all gay – although there’s a question mark over Prejudiced Gerald  (Dylan Tighe) who is accused by his fellow inmates of only attending the class to gain brownie points to enable his early release.

The other two prisoners (played by Andrew Bennett and Mark O’Halloran) hail from Limerick and Ennis, bully poor Gerald calling him a racist and a bigot. He won’t be welcome at the world’s first prison gay pride parade.

The performances by the leads are excellent – funny and convincing. Even though the theme seems to be ‘challenging homophobia’, there’s little of that turgid preachy stuff that sadly too often accompanies work dealing with ‘issues’.

I knew of Mark O’Halloran from the film ‘Adam and Paul’, but I barely recognised him in this – gaunt, slightly hysterical and brilliant. Andrew Bennett as the sleazy Bike of Wing A in the prison is also outstanding.

The staging was simple – some table and chairs. The sound and lighting effects were used brilliantly to create mood.

The silent prison guard ends the piece by reciting ‘De Profundis’ by Mr Wilde and it’s a very moving end to a wonderful play.

Quite surreal, not being based in a real life scenario. It just seems dreamy, and stream of consciousness.

It’s on until Saturday. Go see it if you get the chance.

1 thought on “Theatre times: ‘The importance of nothing’”